A Bike Moves of Olympic Proportions

It's that time again, the Olympics are almost here!! Weather you were born here in the USA or any other nation in the world its time to represent your country in an event of Olympic proportions. 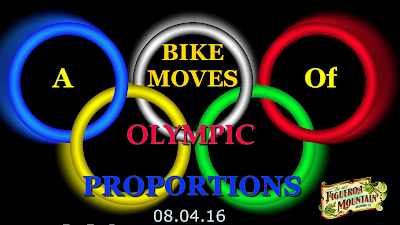 Calling riders from all over the world!!! (but mostly Santa Barbara) It is time to ascend on Vera Cruze Park for a Bike Moves only made possible every 4 years. We will meet at the park at 7:30pm to rally and show off our birth countries patriotism and then hit the streets at 8pm for our normal route ending on the pier. After party is at FIG MOUNTAIN in the Funk Zone, it is Fiesta weekend so expect a large crowd and busy streets. Please EVERYONE note that the SBPD has contacted me and said they will be out in full force writing tickets for no lights, not stopping at stop lights and other violations. They may also come to the park before the ride so be careful with open containers. Let's make this a ride to remember
Did you know that there are over 45 countries represented on this page?? I can only think of a few events that bring so many different countries together.. (actually there are a lot but...) None the less I think it is pretty amazing :)

Email ThisBlogThis!Share to TwitterShare to FacebookShare to Pinterest
Newer Post Older Post Home
Bike Moves is a fun, free, monthly social event that welcomes everyone and fosters good times with a jolly ride downtown.1st Thursday of the month @ 7:30pm meeting at the Plaza de Vera Cruz. Located off E Cota St between Anacapa and Santa Barbara St.The bike moves mission is to get people on their bikes and have a real good time while respecting our community. Bike moves provides Santa Barbara with an all encompassing fun social event for people that enjoy riding bikes of any kind.Bring a commuter bike, beater, racer, beach cruiser, roller blades, or anything that rolls. Every month we celebrate with an optional theme to get everyone in a merry making mood. If it's your first time, don't worry about it and just come out and ride!This is a planned coincidence, non-event. With 3 Rules: Have fun, respect our community, and obey all traffic laws (don’t forget a light!)
http://www.facebook.com/sbbikemoves
Bike moves was inspired by the famous ‘bike happening’ in San Luis Obispo

Bike Moves cooperates with local establishments to donate a percent of the event proceeds to a local non profit.

As of July 2011 Bike Moves has helped raise $1744 for the Santa Barbara Bicycle Coalition!

Thanks to all these local businesses: